The Next Generation in Motor Oil Technology

Underutilized product in our Omaha Store

This is my #1 pick in any high performance car which calls for 5W-30 or 10W-30. Years ago before the premium oils were called “Signature Series” this was the standalone technology leader at AMSOIL. This product received all the new technology first (before the 20 weights started becoming a major share). But still today it delivers the highest performance where 5W-30 or 10W-30 is called for.  Many of our customers have learned this is the best product for their track cars. It’s been known as a primary choice in road racing where street cars (non-modified) are used.

Many people get hung up on the 0W in 0w-30.. Never be scared of the zero! The weight of the oil is the 2nd number. The W is the Winter weight. But it’s not the actual weight in winter, the 0, 5, 10, 15 or 20 is more of a classification representing a range representing torque loss in different temperature categories. But once the engine is at normal operating temperatures it is a SAE30 just like any other 5W-30 or 10W-30.  But to be a 0W you have to have more advanced additives and base stocks thus why 0-60 racers love the throttle response when this is in the engine.

Others choose the 0W-30 for the cold temperature protection but there is no reason to not use this oil in regions of extreme heat!!

AMSOIL, the leader in automotive synthetic lubrication, produced the world?s first API-qualified synthetic motor oil in 1972. Trust the extensive experience of AMSOIL, the First in Synthetics®, to do the best job protecting your engine.

Signature Series Synthetic Motor Oil develops a strong fluid film that keeps metal surfaces separated while its robust anti-wear additives further reduce wear in metal-to-metal contact regions for maximum engine life. The Sequence IVA Engine Test, which must be passed to meet the API SN PLUS specification, simulates extended periods of stop-and-go driving. For 100 hours, the test engine cycles between 50 minutes of idling and 10 minutes of elevated rpm – conditions that encourage engine wear. The camshaft is then measured for wear in 84 locations and an average score is determined. We used Signature Series 0W-20, the lightest viscosity in the line, to further increase the severity of the test. AMSOIL Signature Series Synthetic Motor Oil provided 75 percent more engine protection against horsepower loss and wear1 than required by the industry standard, extending the life of vital components like pistons and cams.

1Based on independent testing of AMSOIL Signature Series 0W-20, in ASTM D6891 as required by the API SN specification.

We armed Signature Series with an advanced detergent system that protects against harmful deposits and low-speed pre-ignition (LSPI). Most new engines feature gasoline direct injection (GDI), often combined with a turbocharger to boost power and improve fuel economy. These new technologies, when combined with a poorly formulated motor oil, promote LSPI and threaten engine operation. LSPI is the spontaneous ignition of the fuel/air mixture prior to spark-triggered ignition. It occurs in today’s advanced engines and is much more destructive than typical pre-ignition. A properly formulated motor oil is critical for protecting your engine.

We challenged Signature Series to the GM Turbo Coking Test, which consists of 2000 cycles of extreme heat soaks. An oil must limit the temperature change within the turbocharger to 13 percent or less to pass the test. Signature Series limited the temperature increase to only 3.6 percent, protecting the turbocharger 72 percent better than required2 by the GM dexos1® Gen 2 specification. 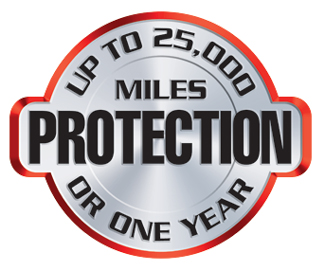 AMSOIL Signature Series Synthetic Motor Oil provides reserve protection, allowing you to go longer between oil changes if you choose – up to 25,000 miles (40,200 km), 700 hours of operation or one year, whichever comes first (see back page for details). Our unique synthetic formulation and long-drain additive system are inherently stable to resist oxidation and neutralize acids over longer periods. Signature Series is designed to deliver outstanding engine protection, cleanliness and performance over extended drain intervals – guaranteed. It provides peace of mind so you can fit oil changes into your schedule. 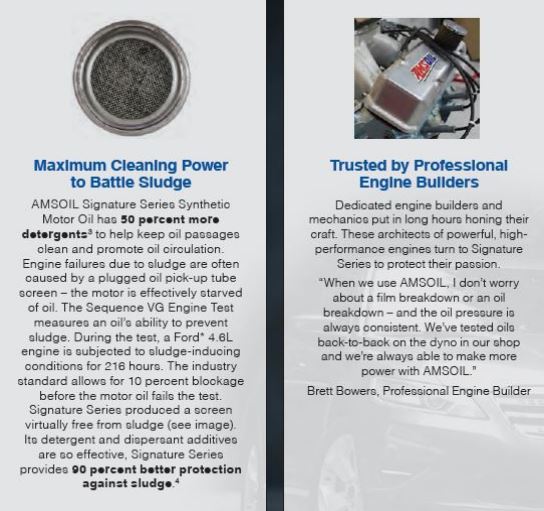 The extreme durability of Signature Series Motor Oil helps your engine run stronger, for longer. We installed Signature Series 5W-30 Synthetic Motor Oil in a Ford* F-150* with a new 3.5L Ecoboost* engine to test its ability to protect turbocharged direct-injection (TDGI) engines from torque and horsepower loss during extended drain intervals up to 25,000 miles (40,200 km). Power sweeps were done at the beginning and end of the test to evaluate horsepower and torque retention. As the graph shows, Signature Series helped maintain engine performance throughout the 100,000-mile (160,934 km) test. 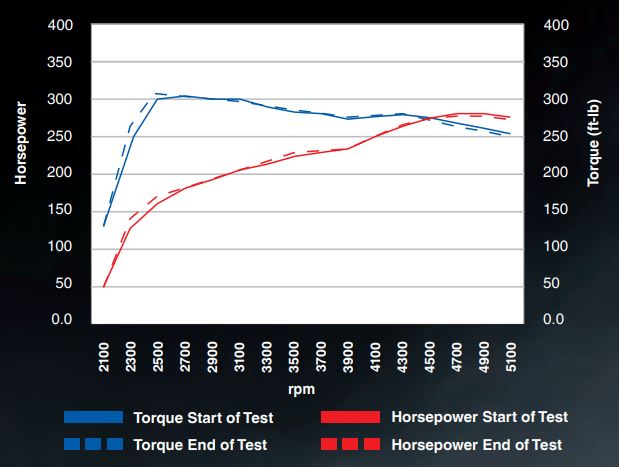 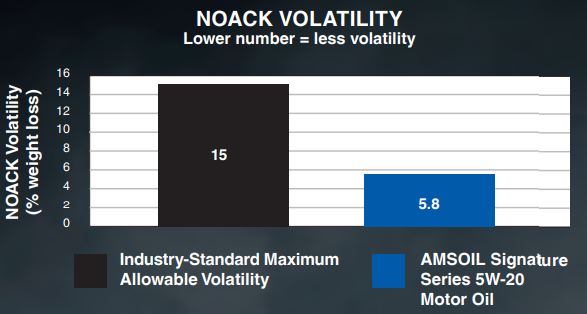 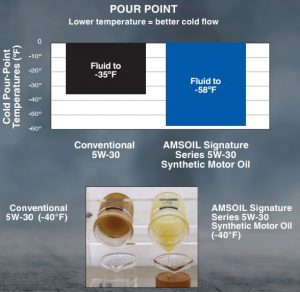 We formulated Signature Series with superior thermal durability that resists breakdown and keeps pistons clean. The Sequence IIIH Test uses the Chrysler* 3.6L Pentastar* engine to evaluate a motor oil’s ability to resist heat and keep pistons clean. The test is conducted with oil temperatures of 304ºF (151ºC), much hotter than normal operation, to accelerate oil thickening and deposits. A single-length 90-hour test didn’t even challenge Signature Series. Its viscosity was like that of new oil, and the pistons were still nearly spotless. To really test the oil, we told the lab to reassemble the engine and run the test again using the same oil. Even after doubling the length of the industry-standard test, the oil limited oil thickening to well under the allowable threshold while delivering 40 percent cleaner pistons than required by the standard.1 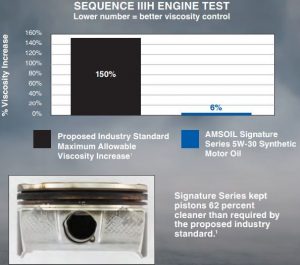 So many pickup trucks and SUVs require 8-quarts of 0W-20 (buy 2-gallons for convenience) . The manufacturer did this due to the need for additive packages to last longer. As you can see above new and future engines need the oil to do more, the OEM want’s engine life to earn them a higher place with consumers. This is one way to do that and with AMSOIL you can clearly go that extra distance without any worry they tried to work around!!

Use AMSOIL Signature Series Synthetic Motor Oil in applications that require any of the following specifications:

AMSOIL Signature Series Synthetic Motor Oil is compatible with other conventional and synthetic motor oils. Mixing other oils with AMSOIL motor oils, however, will shorten the oil’s life expectancy and reduce its performance benefits. AMSOIL does not support extended drain intervals where oils have been mixed.

Aftermarket oil additives are not recommended for use with AMSOIL synthetic motor oils.

Buy in the Omaha store at 84th & G or use this Online link to the Amsoil sale page if you are outside of the area.

Keep Out of Reach of Children. Recycle used oil and bottle.

I highly recommend the AZO 0W-30 Signature Series oil. I have been using it since it came out and the 0w-30 SSO oil before that. This top of the line oil has kept my car running young, now at 449,000 miles.

I live in a cold climate, even at -36 there is no need to plug my vehicles block heater in.

I use SS 0W-30 in my daily driver ’06 Mustang. Change interval once a year with an Amsoil filter. The oil flows like water but slippery to the touch. When the engine idles all you hear is the muted sound of wet valves, and when I punch it all you hear is pure muscle; no pings, no knocks, just a well oiled machine!
That car sees only Amsoil products and has 86000 miles on it. I have never had to add a single drop of oil to the engine between oil changes, ever. Every week when I pull the dip stick the same 2 punch holes are wet with oil . . . i rest my case, this is good stuff!