Many AMSOIL customers find out what they have been missing just by changing to our brand and pushing the limits on the track. It’s a virtual laboratory.

What is the condition of the engine after 4000 passes down the drag strip?

Preferred Customer and truck driver Paul Jordan of Butte, Mont. started racing a Junior  Dragster at only 11 years old. At 14, he purchased a Plymouth* Duster,* which he’s drag- raced since the early 2000s, competing in Montana, Idaho and the surrounding area.

“A friend of the family talked my parents into bringing me out to the racetrack one day and from that point on I was hooked,” said Jordan. “I was only the second one in Montana to have a Junior Dragster at that point.”

As you would expect, the engine constantly operates under severe conditions. It makes about 550 horsepower and regularly hits 5,000-6,000 rpm.

Jordan estimates his Duster has made about 4,000 passes down the drag strip since 2007.

“I’ve won five championships over the years, so I’ve made a lot of passes down a lot of tracks,” he said.

It uses six quarts of DOMINATOR Synthetic Racing Oil, a WIX oil filter as the primary filter and an AMSOIL Oil Filter as the secondary filter. Most notably, it has run on methanol fuel for the past three years, which is prone to attracting moisture and diluting the oil.

“If you switch to methanol, the rule is you should change oil every other race,” said Jordan. Even so, he only changes oil once a year.

“There is no indication of any contamination,” said Jordan. “I look through it to see if there are any metal particles, but I’ve never had any. I probably could have put two years on the oil if I’d wanted to.”

He recently decided to tear down the engine for the first time since building it 13 years ago to refresh it, which typically includes installing new bearings, piston rings and honing the cylinders. He also wanted to make some modifications to increase power.

“I expected to open the engine, pull the bearing caps off and see a couple of them pretty much worn out and on the verge of failure,” said Jordan.

Instead, the inside of the engine looked clean and virtually free of wear.

“It was pretty surprising when we pulled it apart, popped the bearings out and they looked nearly brand new,” said Jordan. “There’s no ridge at all on the cylinder walls, which is incredible. And I used to spray it with nitrous, too. The cylinders are in unbelievable condition. There are a few scuff marks, but nothing you’d expect for something that’s been abused for more than a decade. It was really shocking. And I can’t believe how clean it was; there was no buildup anywhere.”

Jordan said the crankshaft just needed to be re-polished. The car ran its best elapsed times at the drag strip in 2019, meaning it never lost power over the years. 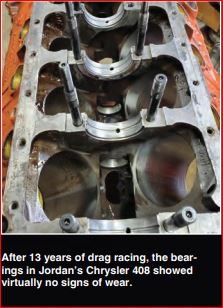 “I could reassemble the engine as-is and go another 13 years,” said Jordan. “I have no reason to believe, other than AMSOIL, that the engine lasted as long as it did. I use AMSOIL in everything I own. I use it in my pickup truck, my semi, my race car…if AMSOIL made shampoo, I’d use that, too.”

Jordan adds that he used AMSOIL Super Shift® Racing Transmission Fluid (ART) in the TF727 transmission used in the car from 2003 to 2017 without a rebuild.

“I truly appreciate the fine lubrication products offered by AMSOIL, and you can expect my loyalty for many more years to come,” he said.