Summer has its benefits. Fishing season. Dirt-track racing. Wrenching in the garage with the door open and the tunes blaring. Add summer-blend gas to the list thanks to the slight fuel-economy boost it offers.

That’s because refiners alter their gasoline and diesel formulations depending on the seasons, and summer gasoline contains about 1.7 percent increased energy than winter-blend gas.

Regardless of the time of year, it pays to know a little about what’s going in your tank to ensure you’re properly maintaining your fuel system.

A primary difference between winter- and summer-blend gas is their Reid Vapor Pressure (RVP). RVP is a measure of how easily the fuel evaporates at increased temperatures.

The higher the fuel’s RVP, the more easily it evaporates.

Winter-blend fuel requires increased RVP. If the fuel doesn’t evaporate readily in cold temperatures, the engine will start hard and run rough when it’s cold outside.

To achieve this, refiners often blend winter gasoline with butane, a relatively inexpensive additive with a high RVP. They adjust the RVP of the final formulation to as high as 15.0 psi to help the gasoline ignite readily in the cold.

Once the temperature warms up in summer, however, high-RVP gasoline can volatilize more easily, which contributes to increased emissions and air pollution.

For that reason, federal law restricts sales of gasoline with an RVP greater than 9.0 from June 1 through Sept. 15.

To comply, refiners reduce the amount of butane in the gasoline and instead use pricier additives, hence one reason gas prices generally increase in summer. The blending process also takes longer, adding to the cost.

Some areas set even lower RVP standards in summer to further limit emissions. California, for example, has a 7.0-psi limit. Given the state’s climate, refiners may sell summer-blend gas as early as April 1 and as late as Oct. 31.

For the most part, the semi-annual switch from winter- to summer-blend gas and vice versa happens seamlessly and goes unnoticed by drivers.

Whether it’s summer-blend gas or not, gasoline contains detergent additives designed to keep fuel injectors and other fuel-system components clean. This helps maximize your fuel economy and reduce emissions.

Some automakers, however, think the additive content, called the lowest additive concentration (LAC), is insufficient for modern vehicles.

It takes a low level of additive to pass the tests, and most gasoline on the market contains as little as 123 ppm of additive.

The low levels of detergent additives in modern gasoline allow deposits to build up on critical fuel-system components, and most motorists are unaware of how dirty the insides of their engines are.

Give your fuel system a deep clean

This is precisely why it’s a good idea to clean and maintain your fuel system with high-quality fuel additives, like those here.

Check out this post for a deep dive on whether fuel additives actually work.

P.i.® Performance Improver is a potent, one-tank additive that deep-cleans your fuel system.

Upper Cylinder Lubricant preserves and builds upon those gains. It also provides vital lubrication to the upper part of the cylinders.

If you drive 20,000 or more yearly this product is for you. Long haul driving you really see the merits of this with the extra protection at the ring. Allows you to get even more out of the lowest priced fuel by preventing deposits.  I use it with 10% ethanol and seems to keep my mileage back where it was prior or better. Stops the corrosion in the quench area which moisture released by ethanol causes on cool-down.
Buy by the case and it’s just pennies on the dollar.

You can save more by using the bottle per the tank capacity but it’s made to pour the whole thing in. One bottle treats up to 25 gallons. Special in store price for the case (Omaha). 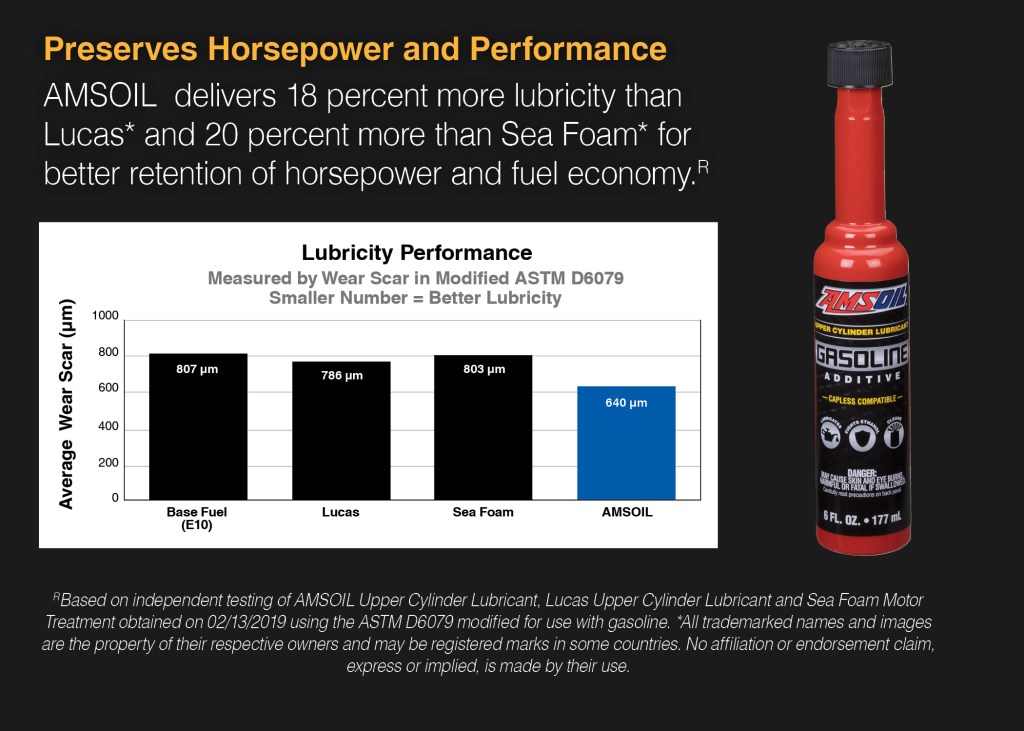 We didn’t forget about you diesel burners. AMSOIL formulates a full line of potent additives that maximize power and fuel economy in diesels.